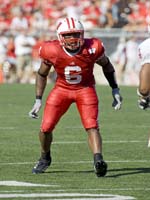 Jack Ikegwuonu is the first Wisconsin Badger off the board in the 2008 NFL Draft.

Ikegwuonu was taken by the Philadelphia Eagles in the 4th round, 131st overall and 32nd in the fourth round.

Ikegwuonu led the Badgers in pass breakups (16) last season and finished the season with 24 tackles in 13 games played.

Ikegwuonu left Wisconsin after his junior season, forgoing his last year of eligibility to enter the NFL Draft.  He suffered a knee injury during his offseason workout program.