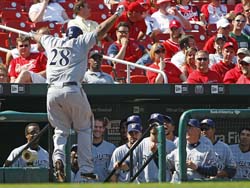 They were like kids in a candy store.  The Brewers all celebrated when slugger Prince Fielder finally clubbed his first home run of the season, giving Milwaukee a 5-3 win over the St. Louis Cardinals at Busch Stadium.

Fielder clubbed a league leading 50 home runs last season, but has been slow out of the gate this season.

Fielder also tied the game in the 8th inning with a run scoring double.  He entered the game hitting just .222.

Fielder said afterwards that he thought about acting cool upon returning the dugout, but he couldn't  Fielder started jumping up and down, as teammates watched, then joined in.

The win allowed the Brewers to salvage the final game of the series and avoid a sweep.  They had to come from behind after starter Manny Parra struggled out of the gate.  But the Brewers bullpen was nearly perfect, including 3 scoreless innings from Seth McClung.

The Brewers are in Cincinnati for the start of a three-game series tonight.