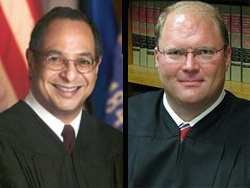 In a close race Tuesday night, Judge Michael Gableman won the votes needed to unseat Justice Louis Butler. Gableman says he is gratified and humbled by the support. He's pledging to give every litigant appearing before him a “fair shake” and to fairly apply the law.

Gableman believes his message and background resonated with voters in the campaign and appreciated his role as a judicial conservative, both as a judge and former prosecutor.

Justice Louis Butler left his campaign rally shortly before midnight. A spokeswoman for the campaign says he was privately conceding the race, but would wait until Wednesday morning to release an official statement.

Gableman is the first candidate in over 40 years to unseat an incumbent state Supreme Court Justice. His victory comes at the end of campaign some groups have called the “most negative in state history.” It also marked the second Supreme Court race in a row where special interest groups have spent millions of dollars on ads to help influence the outcome of the election.