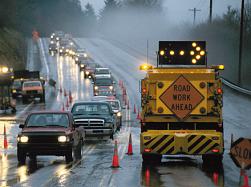 Now that most of the white stuff is gone, you'll be seeing a lot more of the orange.

It's road construction season, and the state Department of Transportation is using Work Zone Awareness Week to urge motorists to be extra careful and alert on Wisconsin roadways. ( 10 tips for driving safely in a work zone )

"It's an attempt to get folks to pay attention to the fact that we've got work zones that are popping up all over the state now. In Wisconsin, in fact, every year we have nearly 2,000 crashes in work zones and those crashes injure 900 people and kill another 11."

Those people, Michael Goetzman with the state DOT, says are real people with real families, just like you and me. Construction workers are simply trying to make travel much better for the rest of us, and they shouldn't have to risk their lives.

"We'd like motorists to understand that the people working in work zones are … it could be your brother, your sister, a friend, relative. You know they have families that they want to go home to every night as well. And we just want folks to slow down when they see the signs of a work zone, put away the distractions, stay alert to the conditions that are facing them."

More than 40,000 people nationwide are injured in work zone-related crashes each year, according to the U.S. Department of Transportation .

In the effort to call attention to work zone safety, the capitol dome will be lit up in orange all week. Meanwhile, Geotzman says motorists trying to avoid the orange barrels can check the DOT website , which is updated weekly with major construction sites, or you can call 1-800-ROAD-WIS. Work Zone Awareness Week in Wisconsin coincides with National Work Zone Awareness Week.

NOTE: Governor Doyle proclaims this week (April 7-11, 2008) as Work Zone Awareness Week in Wisconsin. To remember those workers who were killed in work zone crashes, there will be a ceremony at the state capitol on Tuesday, April 8, from noon to 1:00 pm.