You are here: Home / Brewers / Hall leads Brewers past Giants 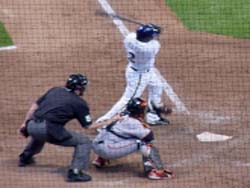 Bill Hall didn't like the way he was swinging the bat during their three-game series in Chicago.  On the bus trip home, Hall used the ride to fix his swing.

The Brewers pounded out 16-hits in the win.  But it was Hall, who watched video on the bus ride home, realizing that he was dropping his hands too low in the batters box.  The video is one that he made during the off-season and he uses it as a reference point when things aren't going well.

Hall clubbed a two-run homer in the first and a three run blast in the fifth.

Rickie Weeks put his name in the record books as well, scoring at least one run in his 17th straight game, dating back to last year.

Catcher Jason Kendall also had two more hits in the number-9 spot.  He's now 6 for 12 on the season.

The Brewers and Giants play game two of the series tomorrow.  Manny Parra gets the start for the Brewers.