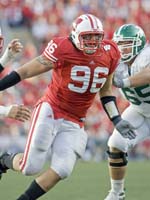 Hayden was selected with the 181st overall selection by the Carolina Panthers, becoming the 15th choice in the sixth round.

Hayden, a consensus honorable mention All-Big Ten selection last year was sixth on the team with 48 tackles and third with 4.5 QB sacks.

The Hartland, Wisconsin native was a three year starter on the Wisconsin defensive line.