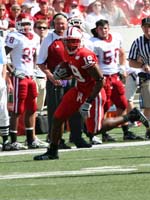 Wide Receiver Paul Hubbard was the fourth former Badger player to be selected in this years draft and the third in the sixth round when the Cleveland Browns made him the 191st overall selection.

Hubbard missed five games during the 2007 season after suffering a knee injury in the team's second game of the season.  He ended the year with 14 catches for 305 yards through eight games.

Hubbard will join former Badger All-American Joe Thomas in Cleveland.  Thomas was the third overall pick in last year's draft and is currently the starting left tackle for the Browns.