You are here: Home / News / Knee injury sidelines Yi for the rest of the season 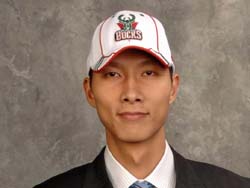 Milwaukee Bucks Director of Player Personnel Dave Babcock announced today (Friday) that rookie forward Yi Jianlian (pictured) will miss the teams final 8 games of the season after suffering a sprained medial collateral ligament in his left knee during the Bucks win over Washington on Wednesday.

Yi underwent an MRI on Thursday and was diagnosed with the knee sprain, an injury that will require 2 to 3 weeks to rest and rehabilitate.

Yi was the NBA's Eastern Conference Rookie of the Month for December.