You are here: Home / News / Madison in 'Jeopardy!' 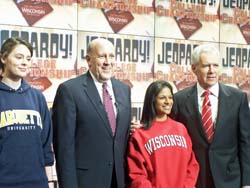 The stage is set for one of televisions' most popular game shows to begin filming in Madison.

Governor Jim Doyle on Thursday welcomed the cast and crew of 'Jeopardy!' to the UW-Madison campus. The show begins taping its college championship series at the Kohl Center on Friday. The Governor says it's great to have the production here. Doyle says he's a big fan and proud to have two Wisconsin students taking part in the production. UW-Madison student Suchita Shah and Marquette University student Danielle Zsenak will be among the competitors.

Doyle met with host Alex Trebek and producers on Thursday, where he issued a proclamation declaring it “Jeopardy! Days” in Wisconsin.

The show begins taping at the Kohl Center on Friday afternoon and wraps up on Saturday. Episodes taped this weekend will air May 5th through the 16th.