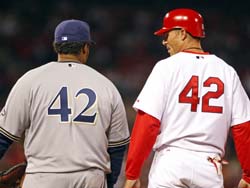 On the 61st anniversary of the day that Jackie Robinson broke Major League Baseball's color barrier, more than 330 players, managers and coaches, including nine entire teams, wore Jackie Robinson's No. 42 to celebrate the Hall of Famer's accomplishments.  Last night in St. Louis, Milwaukee 's Prince Fielder and St. Louis Cardinals outfielder Rick Ankiel stood together at first base, both displaying their number 42 jerseys.

Jackie Robonson broke the color barrier when he played for the Brooklyn Dodgers for the first time on April 15, 1947.  He died in 1972, and his number was retired for all major league teams.

But as Robinson's legacy was being memorialized, a study released recently said blacks make up only 8.2% of Major League players last year, down from 8.4% in 2006 and the lowest level in more than two decades.  The study showed that the number of minority coaches and managers are up, but players are down.