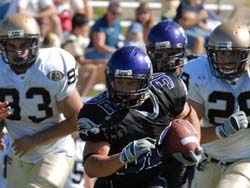 Division 3's college player of the year, Justin Beaver from UW-Whitewater is a longshot to be selected in this weekend's NFL Draft.  But Beaver (pictured) is almost certain to at least get a chance to sign with a team as a free agent and try to earn his way on a team that way.

Beaver has drawn interest from the Green Bay Packers and a handful of other NFL teams after an impressive UW pro day in Madison on March 5th.

Beaver holds the WIAC's all time career rushing record with 6,584 yards and finished his career with a 249 yard performance in the Division III Championship game.

A number of former Badgers expect to be drafted or at least to signed to free agent contracts.

Center Marcus Coleman, DT Nick Hayden, WR Paul Hubbard, cornerback Jack Ikegwuonu and WR Luke Swan could all be selected on day 2 of the draft.  Punter Ken DeBauche projects as a free agent and kicker Taylor Mehlhoff, who could go somewhere between the 5th and 7th rounds.

The draft begins at 2pm Central time on Saturday and wraps up Sunday afternoon.