You are here: Home / Badgers / Packers agree to free agent deals with at least six players, including DeBauche 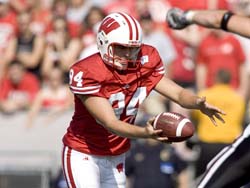 DeBauche averaged 42.5 yards on punts during his career with the Badgers.  He also brings added value as a holder on place-kicks.

DeBauche visited the Packers' facility a few weeks ago in advance of the draft.  He also worked out for the Rams and the Saints.

DeBauche will compete for the Packers punting job with veteran incumbant Jon Ryan and first-year player Ryan Dougherty, who spent some time in camp with the Packers last season.