You are here: Home / News / Packers third round pick has some growing to do 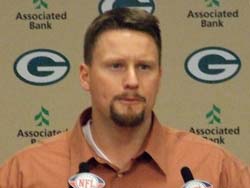 Green Bay Packers 3rd round draft pick, TE JerMichael Finley out of Texas, has a lot of upside but has a lot of growing to do.

Finley was a third year sophomore and started at Texas in 2005 at just 205 pounds.  He's put 38 pounds on his 6'4 frame, currently weighing 243 pounds.  To be an effective NFL blocker, he'll need to add more muscle and weight to his frame.

But tightends coach Ben McAdoo (pictured) says Finley has a lot of potential.  McAdoo said he thinks Finley is a lot quicker than his 4.82 40-time at the Indianapolis Scouting Combine.

The Packers already have Donald Lee returning as the starting tightend, and they also have Tory Humphrey trying to return from injury.

Listen / Download – McAdoo says Finley has some growing to do. :17