You are here: Home / News / The 'Man from Marshfield' honored at symposium 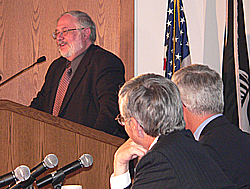 The career and legacy of Melvin Laird is celebrated at the Wisconsin Veterans Museum .

The longtime member of Congress and Secretary of Defense for President Richard Nixon at the peak of the Vietnam War gets high praises during a symposium in the capital city.

Historian George Herring calls Melvin Laird a "fascinating character." "He ranks, I think, as one of the more successful people to have served in a most difficult position."

Laird, who received over 300 honorary degrees, grew up and went to high school in Marshfield. Reed Hall, Executive Director of the Marshfield Clinic , says Laird knew how to get things done in a bipartisan way.

"At the Defense Department Mel was responsible for three primary things, in my judgment: the disengagement of U.S. combat forces from Vietnam, ending the draft, and designing the all volunteer service."

Laird biographer Dale Van Atta explains, despite the difficulty in getting this project finished, he was compelled to do the book because Laird was underrated.

"I should read you some of the rejection slips we got from a number of publishers. You know, this is just a guy that didn't matter, and I couldn't believe it. Every time we got a rejection slip about writing a book about this great man it just made me more concerned that I should do it, that he had been far too underrated for too long."

Symposium moderator and UW history professor Jeremi Suri (author of "Henry Kissinger and the American Century") says we now have the biography that Melvin Laird deserves.

The man of honor was unable to attend the symposium due to an injury. Melvin Laird is 85 years old.

NOTE: Dale Van Atta's biography of Laird, "With Honor: Melvin Laird in War, Peace, and Politics," is published by the University of Wisconsin Press , 2008.