You are here: Home / News / Thompson and the Packers stick to drafting talent on day 1 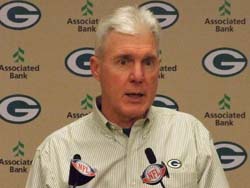 The Packers didn't necessarily have strong needs in this draft.  They probably need to come out with a tightend that can backup Donald Lee and a quarterback to backup Aaron Rodgers.

The Packers go the quarterback when they selected Louisville's Brian Brohm in the second round, number 56 overall.  It was the second of three second round picks on the day and the Packers were surprised to still see Brohm on the board at that point.

With the first of the three 2nd rounders, the Packers grabbed wide receiver Jordy Nelson from Kansas State.  They selected a player at a position of reletive strength on the team.  Yet Ted Thompson feels Nelson will be able to get right into the mix and help make the position even better.

Green Bay added depth in the secondary when they made Auburn defensive back Patrick Lee the third of three 2nd round selections.  Lee was taken 60th overall.

The Packers like Lee because he has the mental and physical makeup that they like at corner.  Ted Thompson said Lee is tough and he likes to play bump-and-run coverage.  It's the earliest the Packers have picked a defensive back since 2004 when they used their first two picks on Ahmad Carroll and Joey Thomas.  Lee was just a one year starter at Auburn.

Ted Thompson said fans are going to like Jordy Nelson, despite their booing the Packers GM at the teams draft party at the nearby Atrium.