You are here: Home / Packers / Thompson goes with a wide receiver with top pick 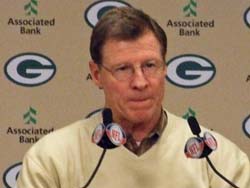 Green Bay Packers fans have to be wondering what's up after Ted Thompson traded out of the first round with the Jets to acquire a 4th round draft pick.

He was a consensus All-American and Unanimous All-Big 12 first-team choice as a receiver and a finalist for the Biletnikoff Award, given to the nation's top receiver.

Nelson caught 122 passes for 1,606 yards and 11 touchdowns.  He ranked second in the nation in receptions per game and second with an average 133.83 yards receiving per game.

The Packers have two more picks in the second round.