You are here: Home / News / Work zone safety is promoted at capital 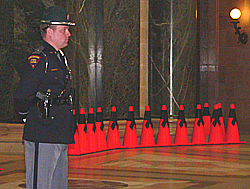 As Wisconsin enters the peak road construction season, the message is clear: Slow down, move over and pay attention!

Wisconsin records approximately 2,000 crashes in work zones every year, injuring 900 people and killing 11. Winnebago County Highway Commissioner John Haese says it happens so quickly: someone dies because of a senseless act of an individual passing through a work zone. Haese recalls the day two of his workers were killed in 2006.

“Two coworkers and longtime employees of the highway department were fatally injured that day because people were not paying attention. They did not move over as required by law. They were following too close, traveling too fast and allowed no time to react to what was happening in the work zone that they were approaching.”

A ceremony at the state capitol recognizes 132 individuals who have been killed and in work zone crashes since 1997. Bess Crowley, with Crowley Construction of Wauwatosa, talks about the death of her employee, Peter Messerlie on May 14th, 1998 when a vehicle driven by a drunken driver entered his worksite, struck and killed him.

“Peter Messerlie was 22-years old; he was in his second season with the company; He had served his country in Bosnia and he was killed serving the public. This should not have happened.”

At the ceremony, the Wisconsin Department of Transportation unveils a new public awareness media campaign, urging motorists to pay attention in work zones and to abide by the state's “Move Over” law . Drivers are required to move over to another lane, or at least slow down when approaching a utility, maintenance, or emergency vehicle on the side of the road. This week is (April 7 – 11) is Work Zone Awareness Week in Wisconsin.  It coincides with National Work Zone Awareness Week.