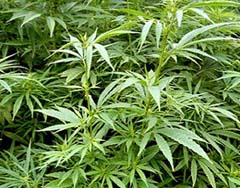 A sophisticated marijuana growing operation is uncovered with four homes in the Southeast Wisconsin communities of Oak Creek, Franklin and Sturtevant. Oak Creek Police Lieutenant John Edwards says search warrants resulted in two-thousand plants being confiscated; along with grow equipment, from homes set up specifically to be greenhouses. The electrical systems were spliced underground in a manner that did not draw attention to the amount of power being used for the grow equipment.

Lt. Edwards says the homes were declared uninhabitable because of black mold that formed from the moisture in the greenhouse like environment.  He says the main floors of each house had damage, but you could not see the grow setup in the basements. The ceilings had collapsed and there was debris everywhere.

The estimated street value on the pot plants is upwards of $5 million. Four men and a woman are facing federal charges. Authorities believe this scenario could be linked to similar operations in other states.