You are here: Home / Sports / Bratfest is here; time to kick off summer 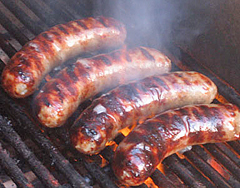 Remembering military veterans, doing yard work, and going to Bratfest! It must be Memorial Day Weekend.

People travel from near and far to take part in the World’s Largest Bratfest as their “kick-off to summer.” So says Tim Metcalfe, whose dad founded the event 26 years ago.  He’s hoping the weather and the high gas prices will work in his favor, as more people avoid driving and just hang out at Bratfest.

Metcalfe says an enormous grill helps to handle the vast amount of sausages needed to keep up with demand. In addition to the “Johnsonville World’s Largest Touring Grill, Metcalfe says other grills allow volunteers to cook over 14,000 brats an hour.

Over 80 local celebrity cashiers are serving up the mouth-watering sausages, including a couple of area mayors, Madison’s fire chief, lawmakers, TV reporters, and even first lady Jessica Doyle.

With the Oscar Mayer wiener mobile and musical entertainment to accompany the brats and beverages, Metcalfe says Bratfest is really a must-attend social event. “Yeah, we’ve got 50 bands with 80 hours of live music … we’ve got a full carnival with a Ferris wheel, we’re teaching kids how to kayak … we have a rock climbing wall. There’s just a lot of fun family things to do.”

Over 4,000 volunteers donate over 12,000 hours of their time in order to acquire some of the proceeds of Bratfest for their charity. To date, Metcalfe says they’ve raised over $670,000 for over 75 different groups or charities. New this year? The Double Johnny — two Johnsonville brats on a bun. Bratfest runs through 6:00pm Monday.