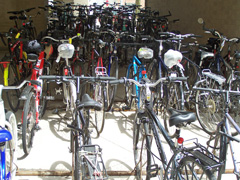 The high fuel prices have made more drivers go "on two wheels." Record numbers of people are signing up for the upcoming bike to work week, according to a director at the Bicycle Federation of Wisconsin. Deputy Executive Director David Vogt says more than ten percent of registrants are first time bike commuters. He calls that "an all time high." Bike-to-Work week runs May 12 to the 16th.

Vogt says bicycling not only adds dollars to one's pocketbook, by saving gas money, it also adds money to the state. Bicycling gives a billion dollars in Wisconsin's economy from manufacturing, retail and tourism, according to Vogt.

While speaking to the advocate for Bike Month, Vogt mentions other benefits including individual health and being a greener citizen.