You are here: Home / News / Gagne back in the closers saddle 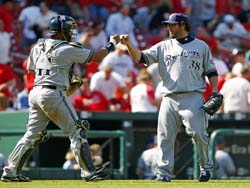 Last week, Brewers fans were booing Eric Gagne as he blew his league leading 5th save.  Last night, the 26,000+ in attendance for game 1 between the Brewers and Dodgers,  cheered Gagne as he came out of the bullpen to try and nail down a Brewers win.

Gagne didn't blow the save, but he didn't necessarily mow them down 1-2-3 either.  But Ned Yost threw him right back into the fire and Gagne nailed down a 5-3 win in the series opener at Miller Park.

Surprised at the support from Brewers fans?  If you think about it, it was smart on their part.  I'm sure the fans knew little about what they were going to get from their $10-million closer, but supporting him certainly helped more than it hurt.

The Brewers let their closer (Francisco Cordero) get away in free agency and Derrick Turnbow has been so bad, he's in the minors.  Gagne has struggled, but the Brewers are going to need his help if they wish to contend for a NL Central title.

Fans in the office here are all wondering if Ned Yost is off his rocker, but give Yost credit.  He knows the Brewers can contend, but only if they establish a successful closer.  Going back to Gagne so quickly shows the righthander that the team still has confidence in his ability.

Don't get me wrong, Gagne hasn't seen his last blown save, but right now he's the best the Brewers have and they're going to need him.