You are here: Home / Brewers / Gagne wants to get back at it 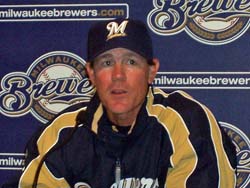 Just two days after pronouncing himself unfit to close games for the Milwaukee Brewers , Eric Gagne says he wants another shot at saving games again.

When that chance comes is in question.  Brewers manager Ned Yost (pictured) hasn't committed to a specific role for Gagne, who is tied for the league lead in blown saves with five.

Gagne pitched two innings in last night's 8-3 Brewers win over the Cardinals.  He worked a scoreless 7th, but then ran into trouble in the 8th, giving up a run.

After blowing a save on Saturday, Gagne said he didn't deserve to pitch in the 9th inning of games.  But Gagne said Monday that those comments were made in frustration and weren't meant as an indication that he had given up on closing for good.