You are here: Home / News / Honoring the fallen 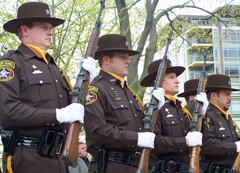 Governor Jim Doyle, Attorney General J.B. Van Hollen, state Supreme Court Chief Justice Shirley Abrahamson and other dignitaries were on hand for the ceremony, which also marked the tenth anniversary of the memorial's construction. In the years since then, 22 Wisconsin police officers have been killed, and there are now a total of 246 names inscribed, along with the words, "duty, honor, valor, service."

Fabiano was shot and killed during what should have been a routine traffic stop just two days before last year's ceremony honoring Wisconsin's fallen officers. Ezequiel Lopez-Quintero was found guilty in Fabiano's death earlier this year. Also added to the memorial were the names of Chippewa County Sheriff's Deputy Jason Zunker, who was struck and killed while directing traffic at a fire scene in January, and Prescott Police Officer Jackie Ryden, who suffered a heart attack after evacuating residents at the scene of a natural gas leak in September of 2006.