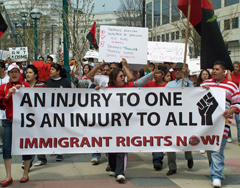 Madison marchers challenged the sheriff in Dane County. Members of Madison's immigrant community and their supporters rallied Thursday, marching from Library Mall, to Brittingham Park, to the City-County Building. Organizers claimed Dane County Sheriff Dave Mahoney is violating a County Board resolution, by asking for documentation of citizenship upon the arrest of certain individuals. Mahoney has said that resolution is merely advisory. In addition, Mahoney says out of 16,000 jail bookings last year, federal immigration was notified only 45 times, and only one person had a hold placed on them.