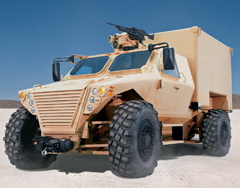 A Wisconsin company is in the running, for a contract to produce the next generation of light military vehicles. Economic benefits could be enormous, for the firm that builds what the Defense Department calls the JLTV. Ken Juergens is the project director at Oshkosh Corporation . “The acronym stands for Joint Light Tactical Vehicle,” he explains. “What it ultimately is supposed to replace is the Humvee.”

The Humvee is a 1980s design, which has been showing its age in Iraq and Afghanistan. Oshkosh Corp. has partnered with Northrop Grumman , submitting a modular design that focuses on protecting the occupants. “It's a unique design,” says Juergens. “We think it's something that will carry on very nicely, for the next thirty to forty years.” With that time frame in mind, Juergens says the Oshkosh design will lend itself to changes in mission, armor and power plants.

Juergens believes landing a production contract could be a “game changer” for the company and the Fox Valley, with some 60,000 to 80,000 vehicles projected. “We will have to expand, and it will offer thousands of jobs. It will be a huge economic boost for our area.” It's a long process, though: the Pentagon will not be awarding JLTV production contracts until 2012.