You are here: Home / Politics / Govt / Uncle Rodney is out as rail commissioner 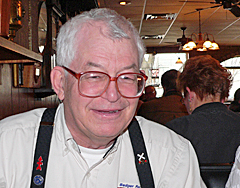 Governor Jim Doyle appoints a state Senator as the new Commissioner of Railroads .

Senator Roger Breske replaces longtime Commissioner Rodney Kreunen , who has served since 1996. Uncle Rodney, as he's known, has high praise for the Democrat from Eland.

"He and I will be very close; I hope to have him come in early so we could have a very smooth transition to keep things going."

Kreunen has known Breske for many years, and says Breske has a strong interest in railroads and railroad safety, which will be helpful in his new position. Kreunen, who is nearly 75-years old, eats, sleeps and breathes trains. It will be tough for him to give it up.

"As my daughter would say, 'Dad let's face it. Railroading is a disease.'"

Kreunen's term had expired in 2005, and was serving at the pleasure of the governor. Kreunen says there's a demand to work on railroad safety needs, and he might do some consulting in the future.

State Senator Roger Breske's term will begin June 4, 2008 and expire on March 1, 2011. The Office of the Commissioner of Railroads was created in 1993 to investigate the safety of railroad crossings in the state.