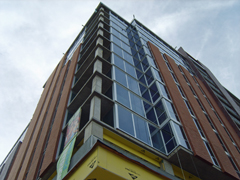 UW Madison's biggest building boom in forty years is in full stride, and that means it's going to be a busy summer and early fall on the sprawling, 935 acre campus. “We'll be starting and finishing about eight or ten new projects on campus,” says Alan Fish, associate vice chancellor for facilities. Fish says campus construction fuels the economy with some three thousand jobs. He also says it's important to know how all these projects are funded. “Seventy percent of the money for all of our capital projects come from donors and the campus itself,” he says. “Only thirty percent comes from the state taxpayers.”

There are at least ten significant construction and renovation projects underway, in the largest campus building boom since the 1960s. “A lot of the buildings (in the 60s) were put up very quickly in anticipation of the huge enrollment increases of the baby boom generation,” Fish notes. “Now, we're replacing a lot of those buildings, and at the same time, saving and renovating a lot of our hundred year old buildings simultaneously.”

Fish expects another four to six years to elapse, before the UW is caught up with many of the deferred improvements and expansion needs on campus.