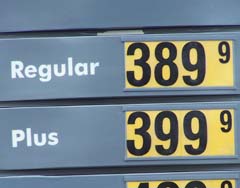 Higher gas prices may impact the decision on whether or not to volunteer as a driver, bringing meals to the homebound or taking them to doctor appointments. Noreen Kuroski is Director of the La Crosse County Aging Unit , which relies on volunteer drivers to transport some 225 home delivered meals every weekday. “We base our reimbursement on the IRS rate, which I think is probably no overly generous,” says Kuroski. In January, that federal rate was increased to 50.5 cents per mile. “Now, since January, the price of gasoline has increased quite a lot,” Kuroski notes. According to AAA Wisconsin , regular unleaded was at $3.82 per gallon in La Crosse on Thursday.

Kuroski says many of the volunteer drivers aren't even requesting reimbursement. “And, I'm afraid what will happen with some of those folks, is they won't say they need reimbursement, they'll just say I can't do this anymore.” Kuroski estimates that some of the home delivered meal drivers are putting in over twenty miles a day. She also worries about the impact of high gas prices on the county's volunteer drivers program, which provides rides to medical appointments for seniors and others who can't drive.