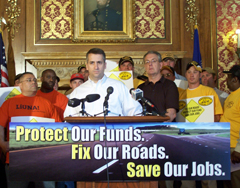 Representatives of road building business and labor groups, along with a number of road construction workers, rallied at the Capitol Tuesday to oppose the deployment of a budget gimmick. With Governor Jim Doyle considering another transfer from the state's segregated transportation fund, in order to balance the budget, labor reps like Terry McGowan with the operating engineers union warn May and June projects around the state could be canceled or scaled back. In addition, McGowan raised the specter of layoffs: “we could expect over three times as many people laid off . . . as were laid off at GM recently.”

State Senator Russ Decker, who's negotiating a budget fix with Doyle, opposes the raid: “not only myself, but I would say over half of the Senate Democratic Caucus would oppose any transfer our of transportation.” Also opposed is Assembly Speaker Mike Huebsch.