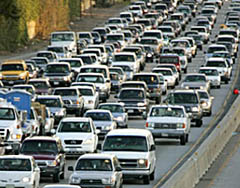 It first came into vogue during the gasoline crisis of the 1970s, then fell out of favor as gas prices stabilized. Now sharply increasing gasoline prices appear to be making carpooling a more attractive option for many commuters. Four dollar a gallon gas may be here to stay, which may help explain why the Wisconsin DOT's Rideshare program has seen a spike in interest. “We had a 78 percent increase in registrations from February to March, and an 85 percent increase between March and April,” says Karen Schmiechen, who coordinates the program. Schmiechen says the on-line Rideshare website is user friendly, typically matching up riders in fifteen minutes or less.

Another commuter matching service has seen a similar increase in activity. “Trafffic on the website is approximately three fold what it was prior to March, says Stephen Schoeffler, executive director of Illinois-based eRideShare.com . “There's been a very sharp increase in interest in carpooling, with the rise in gas prices.” Schoeffler says environmental concerns, and not sending so much money to the Middle East, are good reasons for carpooling, but “at the same time, there's a huge savings in commuting expenses, so I'm hopeful that more people will start doing this.”