You are here: Home / Politics / Govt / Democrats want delegate to lose her vote 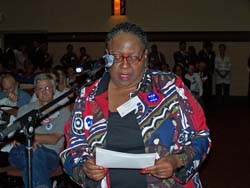 A Wisconsin delegate to the Democratic National Convention could be stripped of her vote.

Revelations Friday that a pledged delegate for Hillary Clinton plans to vote for Republican John McCain in November prompted outrage from Democrats during their annual state convention.  Debra Bartoshevich told the Milwaukee Journal Sentinel that she feels Clinton was unfairly treated by the party and that she has doubts about Obama, so she'll vote for McCain.

State Democratic Party chairman Joe Wineke says Bartoshevich should no longer be a delegate to the national convention in August.  He called on convention goers in Stevens Point to approve a resolution, authorizing the state party to challenge her delegate status with the DNC.  Wineke says the party needs to send a message that Democrats will not support a person who endorses John McCain for president.

Democrats argue that Bartoshevich is violating DNC rules by endorsing a non-party candidate.

Convention goers overwhelmingly approved the resolution.  If the DNC agrees with the state party's request, a alternate Clinton delegate will take Bartoshevich's place.