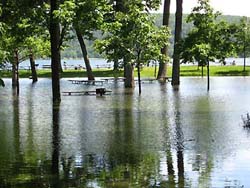 Storms and heavy flooding are leaving a mark on some Wisconsin State Parks.

Flood waters and storm damage have already forced the closures of several state parks, including Devil's Lake, Wildcat Mountain, and Rocky Arbor. Also, the Elroy-Sparta and 400 State trails have had to close because of flood waters.

DNR Secretary Matt Frank says most of the closures are due to downed trees, flooded campsites, and concerns about fresh water. Campers with reservations at any state park in the flood region are being urged to call ahead or check the DNR website for current information. The Secretary says many parks are still open for business, but the DNR wants to make sure all visitors will remain safe.