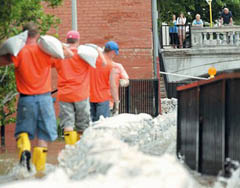 Downtown Janesville businesses along the Rock River are fighting the rising flood waters, and many of the city's residents are seeing water where it's never been before. Looking out over the Rock River in Janesville's Mole Sadler subdivision can be beautiful, unless the river begins running into your home. “Friday night there was no water in the house, Saturday morning there was about three inches,” said resident Nate Ludois. “I started moving stuff out, and by the end of the day (Saturday) it had risen to about six inches.”

Home owner Gary Weber has never seen it this bad. “There's never been water in that house, even in '79,” said Weber, who has a photograph of his home surrounded by sandbags during that year's flooding. “This is a first.” Neighbors are pulling together, said Roger Wenger, and neighbor Debra Cullen said the biggest concern now is the clean-up, especially since the sanitary sewers have failed and are backing up.

Many of the residents in the Mole Sadler subdivision are staying put, despite repeated pleas by the city to evacuate. Entire blocks of the downtown along the river are without power and any apartments should be vacated. Some residents in Milton Township are being advised to evacuate because water on Charlie Bluff road will make it impossible for emergency responders to reach them. Downtown Beloit is beginning to flood with a “Declaration of Emergency” expected by the city council Monday night.