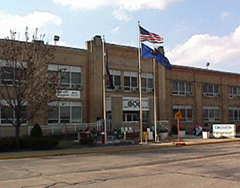 General Motors Chief Executive Officer Rick Wagoner has announced that plans to build more fuel-efficient cars and rely less on trucks will result in the closure of the GM truck plant in Janesville . Industry analysts say the Janeville plant's location, hundreds of miles from suppliers, is a mark against it. It's also the oldest GM production plant, having begun production in 1919. Wagoner announced a strategy for coping with soaring fuel costs at GM's annual meeting today. Wagoner's priorities are shifting because gasoline has more than doubled since 2004, including this year's 31 percent climb to $4. Wagoner says that price is not merely another spike, but represents “the new norm.” After losses totaling $54 billion over 39 months, he is focusing on expanding Detroit-based GM's sales overseas while improving vehicles and cutting costs at home, including a wage- reducing accord with the United Auto Workers

The Janesville plant will cease production of medium-duty trucks by the end of 2009, and of the enormous Tahoe, Suburban and Yukon SUVs in 2010, or sooner, if market demand dictates. The plant had about 2,700 employees as of late 2007. In April, GM announced that because of soft demand for trucks and SUVs, it was eliminating one shift of production at the plant, resulting in the loss of more than 750 jobs. GM is closing three other plants in North America, one each in Canada and Mexico, and one in Moraine, Ohio.