You are here: Home / Politics / Govt / Kohl and Feingold push for unity 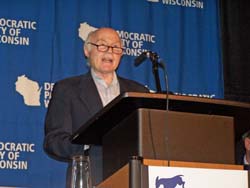 Wisconsin's two US Senators are calling for unity among Democrats.

Following a tough Democratic presidential primary, US Senator Herb Kohl (D-WI) called on Democrats at their state convention this weekend to work together in the coming months. Kohl says the party was vitalized by a primary that involved two strong candidates, but now that it's over, he says Democrats need to come together behind Barack Obama and focus on winning November.

Senator Russ Feingold (D-WI) says the threat posed by presumptive Republican nominee John McCain can't be ignored. He says McCain is leading the Republican ticket because the party knows he stands a chance.

Feingold says Obama must win Wisconsin in order to win the presidency.

Both Feingold and Kohl have officially endorsed Obama.