You are here: Home / Agriculture / Livestock weather the floods 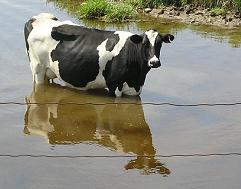 We hear about a lot of flood damage to crops , roads and homes, but not livestock.

That could be a good sign, according to Dave Wachter , UW-extension Dairy and Livestock agent in Grant and Lafayette Counties.

"Well, it's possible that we've lost livestock and that we'll find some when the water is back in its banks, but I have not had any indication that that's the case."

In the past week, we've seen images of farms under water, flooded fields, and washed out roads, but Wachter says, with advanced warning, cows can be moved from low-lying pastures to higher ground. So far, he has not heard of any cases of livestock being lost.

"Certainly there's risk. Anytime you have these flash floods animals may be fence in an area where they can't get to higher ground. The other issues are when you have buildings flooded with livestock in them, they may tend to panic and it could be pretty difficult to deal with them."

Certainly the price of groceries will increase due to all the flooding, but Wachter adds farmers will have a tough time feeding their animals, too. He says the high-quality, first crop of hay farmers depend on to get their dairy cows to produce good milk has been lost.

Also, there's the potential for the leaching of nitrogen fertilizer from the corn fields, which could reduce feed yields down the road.