You are here: Home / Weather / No easy answers for flooded village 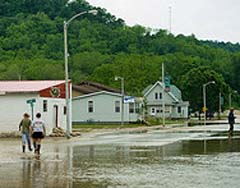 There are no simple solutions, for a Wisconsin community that's been flooded twice in the past year. About 200 residents of Gays Mills attended a special meeting to discuss whether their Crawford County village should relocate uphill. UW Madison Geography professor Jim Knox says he sees a couple of practical problems to that, the first of which is financial. "I talked with some of the people at Soldiers Grove after they moved," says Knox of the village upstream from Gays Mills on the Kickapoo River, which completed its move to higher ground in 1983. "One fellow told me he didn't think he'd ever get out of debt in his lifetime, even though he had an enormous subsidy, to help him move his business."

And, Knox says the moving option is more of a challenge for Gays Mills. "They're located in a very narrow part of the valley. There aren't a lot of good places to move the village, unless you go significantly out of the area where it's presently located." Still, Knox says getting the village out of the Kickapoo floodplain is obviously the best solution. The recent flooding hit a community still struggling to recover from a flood last August. The village has about 650 residents.