You are here: Home / Business / Not giving up on Janesville 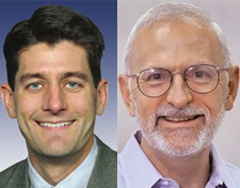 Some officials are holding on to hope for the future of Janesville's General Motors plant. Congressman Paul Ryan wants to convince GM CEO Rick Wagoner to produce a different vehicle at the Janesville facility. “We have the best workers in the country,” says the Janesville Republican, who's represented his hometown in Washington for the past ten years. “It's a world class facility. We believe we have a good case to make.”

Keeping the plant open may sound like a long shot, but it's a possibility Janesville City Manager Steve Sheiffer doesn't rule out. “This isn't the first time that they've announced that they were closing out product in Janesville without announcing a new product,” notes Sheiffer. “This is a competitive place to make vehicles.”

GM says the Janesville plant will cease production of medium-duty trucks by the end of next year, and of the Tahoe, Suburban and Yukon SUVs in 2010, or sooner, if market demand dictates. Sheiffer and Ryan say local, state and federal officials will coordinate efforts to assist more than two thousand displaced workers.