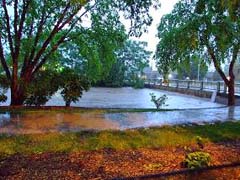 Christopher Freund is staying as far away from water as possible. That's understandable, since the 32-year-old North Fond du Lac man nearly drowned in the rushing floodwaters of the Fond du Lac River early last Sunday morning. Freund had a cell phone in his hand when the ground near the Division Street Bridge in Fond du Lac crumbled beneath him and he fell him. He called 9-1-1, but admits he gave up hope when the water reached his chin: “I just gave up. I threw my phone, took one last breath, and that was it.”

Firefighter Edgar Ramirez-Tellez was the first in the water. “I was a little bit scared,” admits Ramirez-Tellez. “But you just rely on your training. I knew if something bad happened, the rest of my guys would be able to get me out.” Freund got hung up in some pylons, and was unconscious and not breathing when rescuers pulled him out. Firefighter Steve Pieper administered CPR and after about a minute Freund began spitting up water and breathing. He was taken to St. Agnes Hospital for treatment.

Firefighters Pieper and Ramirez-Tellez and police officers Curt Beck, Vance Henning and Keywon Brown were recognized for their heroics Wednesday.