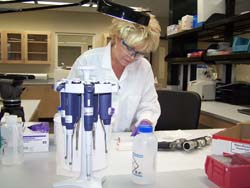 As part of its efforts to clear a backlog of DNA evidence, the Department of Justice is opening an expanded crime lab in Madison. Attorney General J.B. Van Hollen helped dedicate the new facility this morning, after over a year of planning and efforts to expand the number of DNA analysts working for the state.

Van Hollen says the Madison crime lab now has nearly three times the amount of space for DNA testing, which will be used by 17 new DNA analysts hired and trained by the state in the last year. The state crime lab in Milwaukee will also add 8 more analysts to its staff.

Van Hollen says they've completed their training and will work closely with experienced staff, as part of a continued effort to eliminate a backlog of nearly 1,600 cases where testing is needed. The Attorney General hopes to have it eliminated by the 2010.