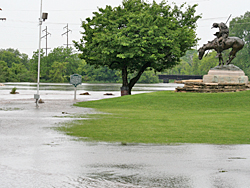 Up to nine tornadoes touched down in Wisconsin on Thursday. But the big problem was more rain – almost five-inches in Green Lake and Oshkosh. Heavy rain caused more flash floods throughout southern Wisconsin, an area still reeling from flooding that began last weekend. There was new flooding in at least 11 counties as far north as Green Bay. Streets in Fond du Lac and Oshkosh were submerged. Residents were rescued in Grant, and Sauk counties – where the Wisconsin Dells duck boats were put to work on the evacuations. About half the people in Avoca, an Iowa County town of 700, were in shelters overnight. Dozens more roads were closed, including part of southbound I-39 near Portage, and the part of I-94 at Johnson Creek that was shut down earlier in the week.