You are here: Home / Recreation / Entertainment / Brett back at quarterback? Don't bet on it. 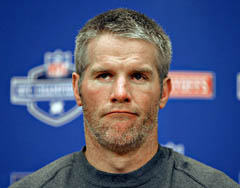 Packers fans are praying for the second coming of Brett Favre, but will it happen? Wisconsin Radio Network sports director Bill Scott has no doubt that Favre is sincerely interested in returning to the Packers this fall. "I think the ( retirement ) decision that he made back in March was a decision that he probably wasn't ready to make at the time," says Scott. "The Packers were pushing him for an answer, because they needed to know how to go forward, and what their plans were going to be."

The Packers have moved forward, spending the off season focusing their efforts on their new starting QB, Aaron Rodgers. Bottom line, Scott doesn't think the Packers want Favre back. And he doesn't see Favre anywhere else: "I think the Packers are probabley going to find a way to politely decline, and stay with Aaron Rodgers." How about that text message Favre sent to his local newspaper, stating this is all just a rumor? Scott guesses this was an attempt to control the story until Favre gets face time with Packers GM Ted Thompson and head coach Mike McCarthy.