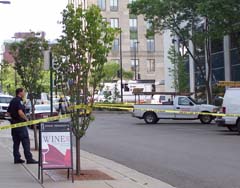 Two loud booms echoed through downtown Madison Tuesday evening, as the Dane County Bomb Squad destroyed a backpack found across the street from the state Capitol. Madison Police Spokesman Joel DeSpain said investigators who arrived on the scene saw items in the backpack they thought were suspicious. “The backpack in fact was on fire at the time a U.S. Postal carrier saw it, and poured his Gatorade on it and put the fire out,” Despain said. The backpack will be examined, although police still aren't saying exactly what they believe was in it. The backpack was hanging from a tree, and the incident forced the closure of some streets and the evaucation of some buildings.