You are here: Home / Politics / Govt / Complaint filed against Gableman 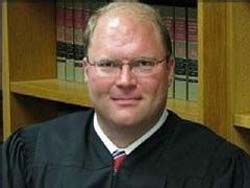 A State Supreme Court Justice-elect is being accused of professional misconduct.

A complaint filed with the Office of Lawyer Regulation accuses Judge Michael Gableman of using his former public office as the Ashland County District Attorney to raise funds for former Governor Scott McCallum. The grievance, filed by liberal advocacy group One Wisconsin Now, claims Gableman made dozens of calls from his office in 2002, when he served as Ashland County District Attorney. The complaint alleges that many of the people Gableman called eventually donated to McCallum's campaign.

One Wisconsin Now Executive Director Scot Ross says the calls strongly suggest that Gableman violated the penal provisions of Wisconsin statutes that adversely reflects on his ethics, trustworthiness, and fitness to be an attorney. The group is calling for a full investigation.

Justice-elect Gableman has denied in the past that calls made from his office were to seek donations. Ross says an investigation would help to determine if that's actually true.

If Gableman were found guilty, he could face a reprimand or have his law license revoked.