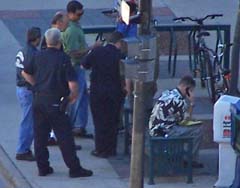 Madison police have arrested an elderly man alleged to have left a suspected explosive device near the state Capitol. David Floyd , who has no permanent address, was arrested outside the building that houses the Department of Justice on West Main Street. Two construction workers who saw Floyd leaving the backpack on Tuesday called police after seeing him again about noon Wednesday.

The backpack left Tuesday was hanging in a tree outside the downtown Walgreen's store about a block from where the man was apprehended. It was on fire and had to be detonated by the bomb squad. Madison police spokesman Joel DeSpain says bomb experts believe a homemade bomb was in the backpack. DeSpain says Floyd is 67-years-old and had items of concern in his possession and on his bike. DeSpain did not have details on what those were. He says officers would ask that the man be charged with a felony related to the bomb scare and disorderly conduct while armed.

A worker who watched the incident from his downtown office said a robot was used to remove a device from Floyd's older model Schwinn bicycle. The man described it as a sports bottle covered with nails, with wires coming out of it. He says yellow powder came out when the robot shook the bottle.