You are here: Home / Brewers / Hall Wins It Again 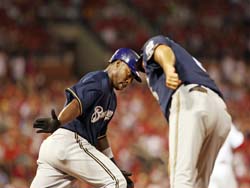 The Brewers rallied to beat St. Louis 4-3 on Tuesday night.

Rickie Weeks' two-out RBI double in the 8 th , followed by an RBI single by JJ Hardy tied the game at 3 and Bill Hall's 400 foot homer to center won it for Milwaukee in the 9 th .

Brian Shouse picked up the win in relief of Jeff Suppan.  Kyle McLellan took the loss.  Salomon Torres pitched a 1-2-3 ninth for his 18 th save of the season.

The Brewers ride a six game win streak into game three of the series tonight as CC Sabathia takes the hill against Braden Looper  The Crew also leads St. Louis by one game in the N.L. Wild Card Race.