You are here: Home / News / Not much has changed on the Favre front 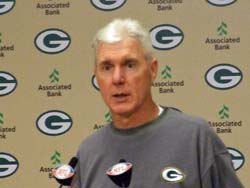 Brett Favre could send in his re-instatement papers and report to Green Bay Packers training camp any time this week.  Or, the Packers could have him dealt to another NFL team by the time that happens.

It's a virtual lock that they won't be releasing the future Hall of Famer, giving him the freedom to sign with any team.

Green Bay Packers General Manager Ted Thompson (pictured) briefed the media at a news conference this afternoon (Monday) and as reporters have become accustomed, they got nothing from the GM.

When asked if it was safe to assume the Packers were trying work a deal to send Favre to another NFL city, Thompson said that they are kicking the tires a bit.

Thompson said they're confident in their decision to go with Aaron Rodgers, but that doesn't mean they're just going to release Brett Favre.  Thompson said that just wouldn't make any sense from an organizational standpoint.

Thompson said he talked with Favre twice last Saturday, roughly 45 minutes each time and the conversation was cordial.  He said that's when Favre decided to say home for a couple of days out of respect for the organization, the team and his former teammates.

An earlier report stated that Favre was asked by Thompson to stay away for a couple of days.

In any event, it's status quo.  Nothing's changed.  It could soon if Favre reports.  That just means the ball is now in Thompson's court and it's up to him to do something with it.

Listen / Download – Bill Scott with the latest on the Brett Favre situation. 1:30