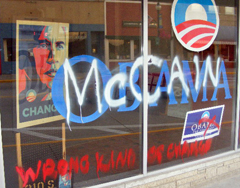 Some not very well executed political vandalism has cropped up in western Wisconsin. A spray painting vandal in Viroqua didn't plan ahead, using red paint to put a big X on a campaign sign at the local Obama headquarters. Along with the words wrong kind of change , the tagger painted himself into a corner. Police Chief Mark Rahr says the last word in the phrase Obama is funded by the is illegible. "The paint was running," says Rahr, "so, it's not exactly sure what the last word is." Rahr thinks it might be man , as in Obama is funded by the man . The less than talented graffiti artist also noted John McCain's military record with the words McCain is a vet . Rahr says the vandalism happened on Viroqua's Main Street, in broad daylight.