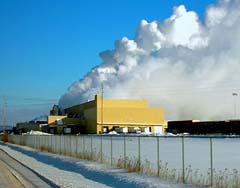 Three men killed in Tuesday's explosion at a paper plant in Tomahawk have been identified. The three, all employees at the Packaging Corporation of American mill, are 55-year-old Randy Hoegger of Tomahawk, 52 year old Steve Voermans of Harrison, and Donald Snyder of Merrill.

The men were killed Tuesday afternoon while working atop a recycled fiber storage tank. Seasonal employee Alex Loka of Tomahawk was treated at a local hospital, and released. Loka was standing on a lower level of the tank when the deadly explosion occurred. Hoegger was employed at PCA Tomahawk for 35 years, and Voermans had worked there for nearly 32 years.

Federal officials from OSHA are investigating the explosion, which was heard and felt over a several mile radius of the mill located just southwest of Tomahawk in the Town of Bradley.