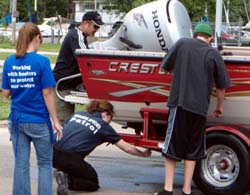 The Department of Natural Resources is launching a new effort to halt the spread of invasive species and diseases in Wisconsin waterways.

Organisms such as zebra mussels and the fish killing virus VHS remain a threat to Wisconsin's interior waters, and the public needs to take an active role in helping to control their spread. DNR Chief Conservation Warden Randy Stark says the agency has nine new wardens working across the state to create a “climate of compliance” among boaters, in the hopes that they'll do their part.

Those wardens are enforcing state regulations on boat landings, educating the public, and working with recreational groups to get them involved. Some of the most basic instructions being given to boaters are to drain live wells and check boat hulls for aquatic hitch hikers.

So far, Stark says nearly 90-percent of the boaters appear to be complying with state regulations. However, he says it only takes one person to move an invasive species from one body of water to another.

Boaters who fail to comply with regulations in place to prevent the spread of invasive species can be ticketed by the state.